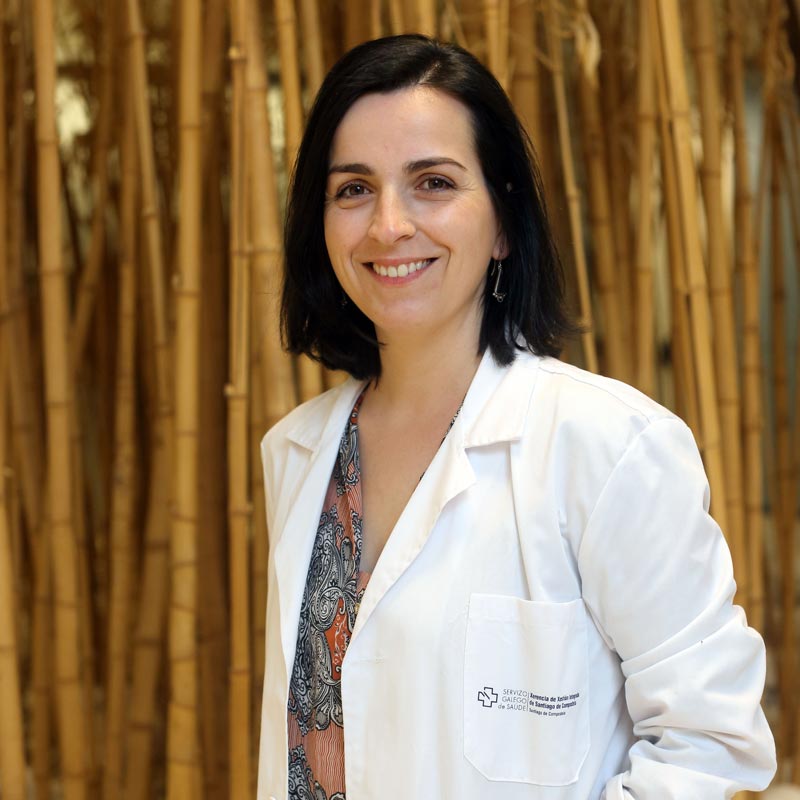 Head of the Nano-Oncology, Nanotheranostic and Translational Therapeutics Laboratory

María de la Fuente Freire, a graduate in Pharmacy from the University of Santiago de Compostela (USC, 2001), completed her doctoral thesis in the Department of Pharmacy and Pharmaceutical Technology at the same institution (2001-2006), in the area of nano medicine and gene therapy. During this stage, she received two grants for predoctoral training, first from the Galician regional government (2001-2002), and then the Ministry of Education, FPU scholarship (2002-2006). She has also had two research residencies, one at the Institute of Applied Ophthalmology of the University of Valladolid (IOBA, 2003), and another at the University of Kuopio, Finland (2004). The results of her doctoral thesis led to her obtaining a PhD with European Doctorate accreditation, and her work was awarded the Prize for Best Doctoral Thesis “SPLC-CRS III and Eudragit Ph.D. Thesis Award”. In addition, she has generated several patents forming part of the intellectual property that led to the founding of the nano medicine division of Advancell S.L., in 2004.
Her post-doctoral training began at USC (2006-2007), as part of a project aimed at inhibiting invasion and metastasis processes, through the application of gene therapy and nanotechnology. Upon completion of this project, she moved to London (School of Pharmacy, University College of London, 2007-2011), participating in the preclinical development of nano-particle formulations, and the evaluation of new targets and therapeutic molecules for the treatment of tumours characterised by high aggressiveness (2007-2010). In addition, between 2008-2010 she was awarded a research grant by the Alfonso Martin Escudero Foundation. Part of her work during this stage was incorporated into the technology owned by the Nanomerics Ltd. spin-off. Her return to Spain was thanks to the Asociación Española Contra el Cáncer (Spanish Association Against Cancer), by whom she was made beneficiary of a contract for cancer researchers in the 2010 convocation.
In 2013, Dr. de la Fuente gained a Miguel Servet contract through competitive bidding, co-funded by the Carlos III Institute of Health (ISCIII) and the Galician Health Service (SERGAS), whose purpose is to incorporate doctors and translational research lines to public hospitals. With her research in therapeutic nano-oncology, nanotheranostics and translational processes to combat tumour spread and metastasis, she was integrated into the Translational Medical Oncology Group, where she directs the Laboratory of Nano-oncology and manages her own staff.
The scientific activity of Dr. de la Fuente is summarised in more than 35 publications in high impact journals, books, and book chapters. She participates in several European consortia, and is the principal researcher of two projects with national financing (ISCIII).
In the laboratory of Nano-oncology, the current team consists of the lead researcher and four researchers in predoctoral training stages. We also participate in the supervision of degree and masters final project work, and receive visiting researchers from other institutions.